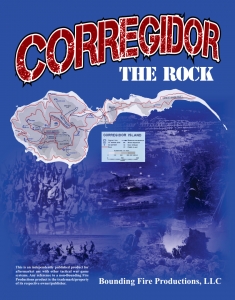 Corregidor: the Rock includes the following:

HASL map printed on two 22"x28" sheets that cover a portion of the 'head' of the island based on the state of the island in 1945, and is used for the CGs and 33% of the scenarios (the rest being on geo boards from other parts of the island)

Player aids for the Campaign Games, NOBA, and Para Drops

Ownership of the following Hasbro/MMP ASL products are required to play all of the included scenarios: Beyond Valor©, Yanks©, Gung Ho©, and Code of Bushido© (or Rising Sun©)

Ownership of the following Advanced Squad Leader© components are required to play all 21 of the included scenarios: