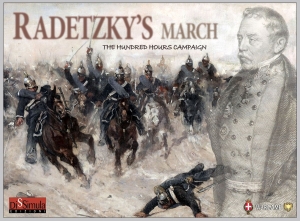 March 20th, 1849: the Piedmontese forces, about 85,000 men with just over a hundred guns, are positioned around Novara, ready to to cross the Ticino river and invade the Austrian territory, moving towards Milan, in an attempt to regain it.

Field Marshal Radetzky, commander in chief of the Austrian forces, 83 years old, conceives a daring plan: to concentrate all his forces, about 75,000 men with over 200 guns, right around Pavia, ready to cross the Ticino, quickly invade Piedmont and force the piedmontese army to a decisive battle.

All these actions are performed by the players alternatively, but not in a conventional two-turn system. The game features a random activation mechanism that makes it always compelling and different, creating chaos and uncertainty, in a realistic and tense simulation.

The heart of the system is the command: simply check how many points you have in the turn, choose the formations you will activate, put them inside a mug; your opponent does the same, then mix and draw.

- Solitaire Suitability: 4 out of 5

WHAT'S IN THE BOX?

Included scenarios - In addition to the basic game, there are some scenarios and variants that allow for shorter games and explore other strategies:

- Mortara and the Sforzesca, the Piedmontese attempt to stop the Austrian advance

- Ramorino obeys orders; this scenario allows the Piedmontese to deploy the V division at the beginning of the game