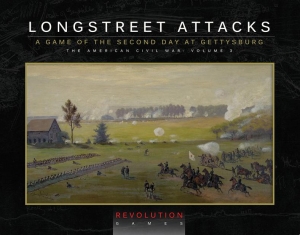 Longstreet Attacks: The Second Day at Gettysburg is a game simulating the fighting on July 2nd, 1863 during the second day of the Battle of Gettysburg and focuses on the southern portion of the battlefield. These engagements involved General Longstreet’s attack against Sickles’ positions, with troops from Hood’s and McLaws’ Divisions, assisted as well by Anderson’s Division of A.P. Hill’s Corps.

The game is specifically designed to be a playable regimental-scale game that players can complete in a long evening. It allows the players the immersive experience of tactical combat without the heavy rules overhead normally found in such games, while also delivering a comprehensive experience of limited intelligence and unexpected events. The game features the Blind Swords chit-pull system which emphasizes the three “FOW’s” of military conflict: fog-of-war, friction-of-war and fortunes-of-war. With each chit pull, players will be challenged to make tough decisions based on their assessment of the situation at that moment. Unlike traditional chit-pull systems, the Blind Swords system ensures that no combat units can be counted on, or conversely, counted out. This yields an environment of tense action and constant surprises – an environment that will challenge each player.

All regiments and batteries of the Army of Northern Virginia and the Army of the Potomac that took part in these actions are represented in the Order of Battle. Each unit has a Strength Point number, with each point equaling 50 men or 1 artillery piece, and a Cohesion Rating, representing the unit’s morale, training and experience.

Combat and Cohesion System: The combat system is “firepower” based and utilizes the unit’s size and Cohesion Rating to determine its effectiveness. The combat system is driven by a unique four-D6 dice mechanic. All four differently-colored dice are rolled simultaneously. The black and white dice generate an initial result ranging from 11 to 66. The other two dice (red and blue) simultaneously give the players the tangible effect of the initial result and represent physical casualties suffered by the unit (the red die) and the morale effect of the enemy’s fire (the blue die).

Orders System: A player must first choose one of four possible Orders that an activated Brigade will operate under – Attack, Defend, Maneuver or Rally. Each Order has specific parameters that provide benefits and restrictions. This Order choice can be critical to a unit’s performance during its activation.

Chit-Pull System: The Blind Swords chit-pull system is a unique mechanic and generates challenging actions and difficult decisions for the players. It features four different types of chits, all of which reside in the same cup, each with special effects:

Division Activation Chits. These activate any one Brigade (not yet activated) from the Division listed on the chit. However, further Brigade activations from this Division are dependent on the Division General’s Command Rating and a die roll. A successful die roll places the chit back into the cup and thereby the other Brigades of the Division have a chance to activate in the future. A failed die roll discards the chit for the turn and the remaining Brigades will not be able to activate normally (however, see below).

CIC Chits. These are a special kind of Activation Chit. The Union player has a Sickles chit and the Confederate player has a Longstreet chit. These chits allow the player to select any one Brigade in the game for activation - even if it has already activated or will be activated later in the turn. Thus, this is the opportunity to activate a Brigade twice in the turn or activate a Brigade from a Division that has lost its Division Activation Chit.

Event Chits. There are nine Event chits assigned to each player. At the start of each turn, players may select any one of these chits to place in the cup (obviously an Event they really want). Three Event chits are randomly thrown out of the turn and will not be used – the remaining five Event chits are also then placed into the cup with the previously pre-selected chit. In this manner, players are never assured of drawing any particular Event chit, except for the one they chose. Each Event chit has a Unique Event side (all the chits have a different Event listed) and a Command Event side. The Unique Event is a tactical event that can be used on the battlefield and each Event has specific effects and options for the player to consider. Examples are Rebel Yell!, Union Logistics, Quick March and Heroic Stand. The Command Event side is used for more strategic options. The Union player may call for reinforcements from the rest of the Army of the Potomac (only the III Corps Divisions are available at start) and the Confederate player can attempt to better coordinate his attack (by increasing his Division General’s Command Ratings).

Wild Chits. These are the two “chaos” chits. One chit is Fog of War, which can possibly cause units from either side to conduct unexpected attacks or withdrawals, or can cause General officer casualties. The other chit is Fortunes of War which will immediately discard the next chit pulled with no effect – including that special pre-selected Event chit if it happens to come up!

The map is 22” x 34” hexagonal map of the entire south end of the Gettysburg battlefield. Each hex equal 150 yards and contains all the significant terrain details – elevations, slopes, woods, swamps, buildings, orchards, etc.

The game will include at least five scenarios:

The Round Tops. A small scenario to introduce people to the games rules.

The Whirlpool. A ten turn scenario about the most contested part of the battlefield. The Wheatfield, Devils Den, Houck's Ridge and the Peach Orchard. 4:20 to 7:20pm

Assault on the Emmitsburg Road. A 9 turn scenario of the battle for the Peach Orchard and Cemetery Ridge. 5:40 to 8:20 PM

Sickles Stays Put. A what if scenario exploring a set up closer to what Meade intended for Sickles before his forward advance.