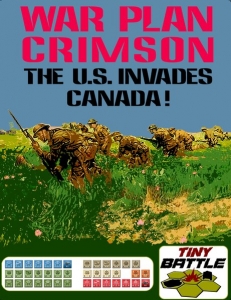 American President-for-Life Hugh Johnson's threats over securing unfettered access to the St. Lawrence River became deeds yesterday as troops of the American 1st and 27th Divisions lurched across the border into Canada. Elements of a United States Marine Corps brigade are reported to have landed at the small town of French Village, west of Halifax, and are advancing on the city.

Canadians were summoned to defend their homeland by the newly-appointed Defence Minister, John E. Mitchell.

"We will not permit these American scoundrels to pave our paradise and put up a parking lot," Mitchell warned. "All true Canadians will rise to defend our unique culture and way of life in this, our country's hour of need." (Mitchell was shortly thereafter the subject of a Vote of Censure by the Legislative Assembly of Quebec for having failed to make his remarks in French.)

Meanwhile, all units of the Non-Permanent Active Militia in all Militia Districts have received mobilization orders, though transport and equipment are lacking. Volunteer battalions have spontaneously formed in Montreal and Halifax as university students, local police, townsmen and farmers band together to resist the invasion. And the majesty of the British Empire has begun to make itself felt: a battalion of British troops are reported to have arrived at Quebec City; even more encouraging are sightings of Royal Navy and American ships engaged in heavy exchanges of fire off Halifax.

WAR PLAN CRIMSON is a simulation game of a hypothetical invasion of Canada by the United States some time between 1935 and 1939. The game is for two players, one representing the leader of the armed forces of the United States that could be deployed against Canada (the US player) and the other representing the commander of the Canadian and British forces that would defend against a foreign invasion (the Commonwealth or CW player).

In reality, both countries have enjoyed cordial relations but it is also historical fact that the United States Army did make plans to invade Canada, in the context of the ‘Rainbow’ war plans where potential enemy countries were referenced by colors (Japan was orange, Britain red, and Canada crimson - whence the title of the game). In most cases these plans were created, studied and maintained in order to keep staff officers sharp, but the strategic priorities of an actual plan submitted for consideration in 1935 (seizing Halifax and Montreal in a quick campaign before Britain could intervene decisively) are the obvious ones and have been used as the basic framework for the action in this game.

- a 17x22" map, showing the environs of Montreal and Halifax at 3 miles per hex

- a plastic bag to smother all of the above