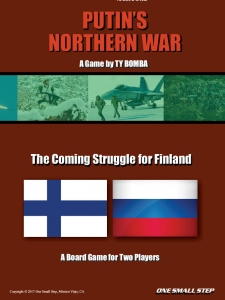 The crisis being modeled here, though not much discussed (yet), will certainly come into being if the drift of the two "neutral" Scandinavian nations toward NATO membership continues. That would, in turn, most likely occur if--probably in reaction to the growing Muslim immigration crisis there--a conservative government came to power in Sweden. Part of that altered worldview in Stockholm would then likely also move that government to want to join the Western alliance. Since the Finns are already allied with Sweden (and Denmark), it's hard not to imagine such a shift wouldn't also pull Helsinki in the same direction.

All of which would be unacceptable to Putin. His goal here would therefore be to bring off a quick and victorious blitzkrieg-like campaign against Finland, while probably also seizing the low-hanging geo-strategic fruit of Sweden's Gotland Island. That would allow him to install a fully subservient government in Helsinki, turn the Baltic Sea into a Russian lake, and simultaneously recast Sweden into Finland's former role: a quiet and pliant neutral. This game can be played as a stand-alone, or it can be used as part of a new "Grand Campaign Scenario" for combined play with its parent game, Putin Strikes.

This isn't a simulation of the "opaque (a.k.a. gray) war" techniques most recently used by the Russians in the Crimea and eastern Ukraine. Rather, it's designed to facilitate the examination of the strategic possibilities (along with their operational undertones) inherent in this potentially larger and more drastic situation.

Each turn of play equals half a week of real time. Each hexagon on the map represents 20 miles (32.5 km) from side to opposite side.

The Finns and Swedes have their entire combined ground force in the Allied side's OB. The Russians would be looking to wage and win this campaign as quickly as possible, but without logistically and administratively disrupting their entire ground force. Accordingly, they are given everything normally available in their Western Military District reinforced with all the new offensive-oriented units they've lately been creating. That includes almost all of their special operations branch, the expanding list of new heavy divisions, and the ultra-elite Order of Suvorov & Kutuzov Heavy Sapper Brigade. The system in this design is the Big And Dumb Armies Simulation System (BADASS). It's based around the idea large First World armies almost always begin major wars well trained and fully equipped. Unfortunately for those in their frontline units, both the training and equipment usually only make them ready for the previous war, not the one they're about to fight. Beyond that, the initial period of such wars is characterized by only a partially abandoned peacetime psychology among the officers and enlisted. That is, no one as yet appreciates what it means operatively to be in an all-out war. All that comes together to give overall performance a high-risk, volatile and fragile quality: no one as yet knows what's actually possible or wise to try to accomplish. Seemingly powerful units therefore easily become "disrupted"--especially as gauged in relation to similar units' performances later, after everyone's been thoroughly schooled in the art of war as it exists in the present.

The system therefore doesn't play--when looked at on a step by step basis--in a way common to operational-level simulations. The whole thing has a Go like quality to it. That commander will succeed best who--rather than reacting to or launching operations opportunistically one at a time--plans his campaign and then campaigns on that plan. Of course, it's also true no plan survives first contact with the enemy. So, even as you plan, you must do so while leaving within your scheme of operation at least some capacity for opportunism. Strategy is not simple; it is complex.

In this system we also explore the philosophic backlash that seems to be building throughout First World militaries in regard to the increasing organizational dominance of brigades over divisions. That is, even as the former have increasingly come to be the unit-of-choice for deployment at both operational and strategic levels, there's growing concern brigades may be too large to employ the dexterity needed in counterinsurgency operations while being too small to hold up for long in any force-on-force shootouts between First World opponents. Hence the contrasting characteristics generated by the differences in size between brigades and divisions are highlighted here.

- One book of rules