Montecuccoli on the Raab 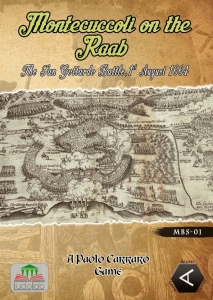 Raab is the first game of the newborn Montecuccoli Battle Series, designed by Paolo Carraro. The Battle of Saint Gotthard was fought on 1st August 1664. Montecuccoli led the League of the Rhine to a great victory over the Ottoman Empire, despite the lesser number of soldiers.

Montecuccoli was the military genius in the 17th century who won all the battles in which he was the commander.