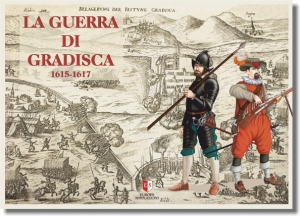 In the early 17th century two powers competed for the predominance of the Adriatic Sea: the Republic of Venice and the House of Austria. Venice held the rule of the sea, but Austria did not miss any opportunity to challenge it. When the raids of the Uskoks, corsars of Catholic faith in service of the Habsburgs, from the Kvarner Gulf to the Venetian routes became more insistent, Venice reacted by triggering a long and bloody war in its eastern borders with the idea of ending the raids, to win the Austrian challenge and to regain the fortress once founded and then lost, Gradisca. Saint Mark's lion roared still ...?

The War of Gradisca 1615-1617 is a simulation game of that ancient conflict, which saw the confrontation of two powers of the era in a political and military context that anticipated the long period of the Thirty Years War.

The war was very costly in terms of human lives and resources for both sides and ended with poor results, a minor Venetian victory, but at least the threat of the Uskok pirates vanished.

The game is based on accurate historical researches and the system is designed for both beginners and wargames fans. The game mechanic allows activating units in an unpredictable sequence, enabling uncertainty about campaign outcome and replayability. Cards introduce political and historical events and allow the development of custom strategies.?