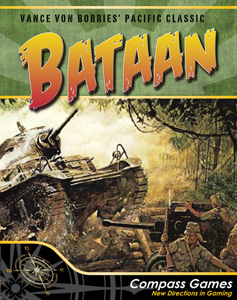 Bataan! is a two-player operational level game of this WW II Pacific theater campaign, January through April 1942. It presents a fascinating contest of two mismatched armies on a subject our hobby has not gamed often. The US/Filipino defense, embattled, isolated and led initially by Gen. Douglas MacArthur, for three months held off a numerically inferior but well-equipped and very aggressive Japanese force led by General Masaharu Homma. While the US and Filipino forces can be said to have won most of the first contests: the Abucay Line, the Battle of the Points and the Battle of the Pockets, it would be the final contest that decided the issue. Only because of continued complete isolation would the US lose that final battle in April 1942. And yet it was that heroic defense of sublime courage that helped motivate the US to endure the reverses of the war and persevere to a complete victory. It was "Why We Fight."