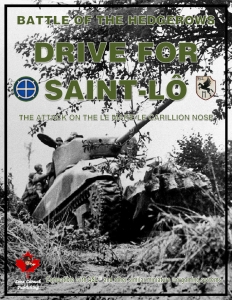 A Tactical Mission (TM) Pack with 1x Tactical Mission (a.k.a. Campaign Game) + 5x Scenario played on a historically based (24½"x 32" with 1" hexes) map of the Le Mare-Le Carillon Nose feature, located two-miles north of Saint-Lô, France. This TM revolves around the efforts of the US 35th "Santa Fe" Division's attempts to capture the ancient city of Saint-Lô. Standing in their way is the battle-weary Germans of Kampfgruppe Kentner, 352.Infanterie-Division.

DSL-1 Le Petite Ferme: Company E, 2d Battalion, US 137th Infantry Regiment is tasked to capture a small farmhouse. Suspecting that it was abandoned or held by a few Germans, Company E advanced toward the stone farmhouse, when a machine gun let loose, spraying bullets into the hedgerows in front of the Americans.

DSL-2 The Right Nostril: With the capture of the Le Petite Ferme, Kampfgruppe Kentner fell back to its next line of defence, astride the east-west lane from la Mare to Le Carillon. After clearing out the farmhouse and the surrounding buildings, Company E reinforced by Company G continued its advance. The Americans using the tactic of putting down heavy concentrating of fire on suspected German positions and then clearing them with small groups of men, proved time-consuming.

DSL-3 The Left Nostril: As the 137th Infantry Regiment struggled forward on the right, on the American left flank, the 320th Infantry Regiment was moving forward behind a creeping barrage. The Americans had hoped that the enormous amount of firepower, supplemented by fighter-bombers attacks would overwhelm the Germans. However, the Germans were well dug in and well protected, so that when the barrage advanced passed, the Germans came out of the bunkers, remanned their weapons, and waited for the Americans to come into view.

DSL-4 La Mare-Le Carillon Nose: The American attack kicked off a 08.00 hours, from the start, the advanced proved to be time-consuming with heavy casualties. The Germans, were using the terrain skilfully and to the best of the their advantage by setting up defensive line after defensive line to effectively slow and in some places stop the Americans' advance. But as the afternoon waned, the Americans had managed to fight their way to top of the "Nose". One more pushed would surely be enough to capture the high feature.

DSL-5 The Drive for Saint-Lô: The BIG scenarios of the module, for those who don't want to play the Tactical Mission (Campaign Game), this scenario covers the entire map.