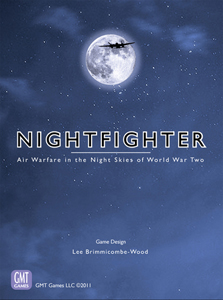 NIGHTFIGHTER is a game of air warfare in the night skies of World War II.

The game details the development of night fighting tactics over Britain, the Reich and the Pacific. Using a brand-new 'blind' play system, an umpire controls the attacking forces and moderates the player defender, who must find, fix and destroy the incoming bombers.

Nightfighter will recreate the tactics of night fighting, from the 'cat's eye' fighting of the London night blitz to the Mosquito intruder operations at the end of the war. Scenarios include Freya AN interception in the Dunaja dark fighting zones, Himmelbett zones, the introduction of AI radar, Wilde Sau and Zahme Sau tactics. The evolution of electronic systems and countermeasures is modeled, including the use of 'Airborne Cigar', 'Window' and 'Serrate'.

There is a huge variety of aircraft in the game, from early Do217s and Ju88 fighters, to advanced fighters such as the He219. Rarities such as the Ta154, Me262B-1a and the Japanese J1N1 Gekko will be included. Schräge Music ('Jazz Music') oblique gun systems are modeled. The Allies get 'cat's eye' Hurricanes, Blenheims with AI Mk IV radar, Beaufighters with Serrate and various marks of Mosquito, including the NF30 with the advanced AI Mk X radar. Pacific operations will see F6F-5Ns and P-61A 'Black Widow' fighters engaging Japanese bomber threats.

Each aircraft unit in the game represents a single aircraft. Each hex on the map is roughly 1 mile across and each game turn is approximately a minute of real time. The map represents the width of the bomber stream and displays dark fighting areas, searchlight zones and searchlight beacons. Play times for the game are in the region of 1 to 2 hours.

The final game contents will comprise: