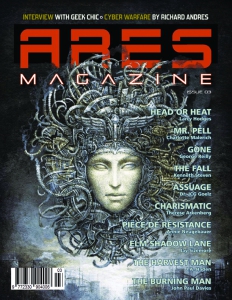 The Harvest Man by J A Haden

Head or Heat by Larry Hodges

The Fall (continued) by Matthew Wuertz

Born of Titans is a game of heroism in the world of ancient Greek mythology. One to four may play, with special rules at the end for one and two-player games. Each player portrays a hero from legend who undertakes quests to battle with fierce monsters and retrieve epic artifacts.

Heroes, Allies, and Crew have three attributes: Battle, Navigation, and Wits. During the game, players must make die rolls against the combined attributes of their respective Hero, Ally, and Crew. Monsters and other game effects can kill Crew. A Hero begins with six Crew. Players record the current number of Crew by placing the Crew marker on the corresponding shield number. As a player's Crew are killed by monsters and other game effects, the owning player moves the marker to a shield with the appropriate lower number.

A Hero with no remaining Crew is essentially alone on a raft. Her crew is dead or has run off. If a Hero's Crew counter is on the "0" Shield on her Ship mat, the Hero may not add the Crew's skill numbers, and may only take one Action each turn. Also, when a Heroâ€™s Crew reaches the "0" Shield, she loses any Gear or Ally counters she had. Turn those counters face down and shuffle them back into their respective piles.

In the fashion of good mythology, BoT relies on a generous amount of Prophesy. The amount of Prophesy collected by a Hero is represented by a track on her Ship. A player may have no more than six Prophesy points at any time. Prophesy has two primary uses. A player may spend a Prophesy point during her turn to look at all counters at any Site on the map. This is important so a player can know what sort of challenge she faces on her next Quest or what a particular Sea Monster is. A player may dedicate Prophesy markers to provide bonus die rolls, if needed, during a Challenge. Each Prophesy committed allows the player to roll an additional die during the Challenge roll. Any Prophesy committed are lost at the end of the Challenge, whether used or not. Neither of these uses costs the player an Action.

Each player begins the game with a randomly drawn Quest Marker. The first player to gain a third Completed Quest wins the game!