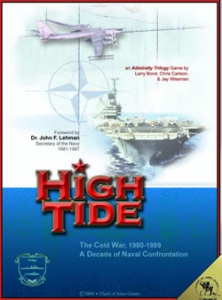 An Harpoon 4 expansion . Based on what we have learned since the collapse of the Soviet Union, it compares, for the first time, the strengths and weaknesses of the Cold-War adversaries at the height of their power. The 128- page scenario book provides thirty naval battles, covering all types of naval operations: antisubmarine warfare, convoy operations, mining missions, amphibious landings, air-strikes on land and naval target, special missions, and sub-on-sub engagements from between 1980 and 1989.

Sidebars describe the naval technology of the time, as well as important events and key leaders. Over half the scenarios are part of a linked campaign based on a story line written by Larry Bond and Chris Carlson. Jay Wissmann has contributed the scenarios. The foreword was written by Dr. John F. Lehman, Secretary of the Navy from 1981 to 1987. Dr. Lehman was directly responsible for the condition and performance of the U.S. Fleet, and its amazing buildup during that decade.

High Tide's Data Annex is a comprehensive listing of platforms, weapons and sensors for naval, air, and some land units. All the data is based on real-world information, and is the most accurate unclassified source in existence. The rules, which are also the basis for the Harpoon computer game, describe how weapons and sensors behave, individually and in combination, how to improve their performance or reduce their effectiveness. Sidebars provide deeper background and guidance on basic tactics.Completing the boxed set are 210 ship (1/2"x 1") and 140 aircraft and weapons counters (1/2"x 1/2").