Battle Above the Clouds 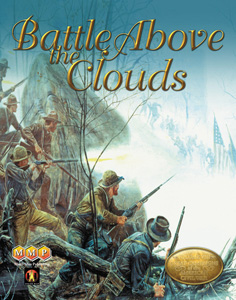 Battle Above the Clouds is the 8th game in the award-winning Great Campaigns of the American Civil War (GCACW) series. This is the first game covering a western theater campaign and will serve as the core area for a series of maps covering the entire corridor from Nashville, Tennessee to Atlanta, Georgia. The game includes both the Chickamauga campaign of August/September, 1863 and the Chattanooga campaign of October/November of the same year.

Battle Above the Clouds uses the same GCACW Standard Basic Game Rules that were first published in MMP's Skirmisher magazine and Grant Takes Command. The game scale remains unchanged for the western campaigns, although two new terrain types (hills and ridges) have been added to properly represent the rugged terrain that dominates the Chattanooga area.

As the first western module in the series, Battle Above the Clouds brings a number of famous generals to the series for the first time, including:

Special rules are included in the game to handle Bragg’s tempestuous relations with his subordinates, Forrest’s ability to shine in detached cavalry raids, and the effectiveness of Wilder’s carbine-armed mounted infantry brigade. Battle Above the Clouds also includes detailed systems to depict the week-long Union engineering effort to cross the Tennessee River and their tenuous wagon-train supply line into Chattanooga (including the famous “Cracker Line”).

Battle Above the Clouds includes a wide variety of engagements in the Basic Game scenarios. The seven actions include two introductory scenarios, a cavalry raid, a fighting withdrawal, a series of operational maneuvers through mountainous terrain, and two large battles:

The two Advanced Game scenarios cover both major periods of campaigning in the region:

The Advanced Game rule set has also been standardized so players will be able to quickly move to new campaigns in the series.

Battle Above the Clouds contains:

Battle Above the Clouds credits: