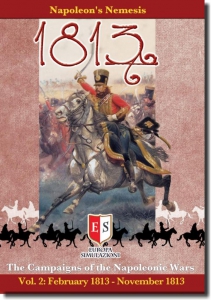 It is February 1813. The defeated remnants of the once invincible Grande Armée have arrived back in the West. Despite the catastrophe in Russia, all is not lost for Napoleon.

On the European mainland, only Russia is openly at war with France. In theory, the other powers, Austria, Prussia and the German States, still remain allies. Can the Emperor recruit a new army and secure sufficient military success to persuade his allies to stand firm; or bolstered by the Russian advance, will they turn against the French? “1813: Napoleon’s Nemesis” simulates this fascinating campaign which determined the shape of nineteenth-century Europe. ?

1813: Napoleon’s Nemesis” is strategic in scope. Combat units represent all the divisions (categorised as veterans, line or conscripts) which took part to the campaign, together with the most important commanders. The game presents strategic options corresponding to those available to Napoleon and the Coalition forces, and replicates the consequences which flow from each. At the same time, it captures the essence of campaign warfare during this period – sweeping manoeuvres, feints and deceptions, forced marches, and the greater flexibility and cohesion of seasoned troops – as well as the crucial matter of logistics. The Basic Rules are simple and can be learnt very quickly minimising the amount of time players need to spend consulting the Rulebook. Optional Rules and Advanced Rules (including cards) add even more realism and sense of period.

The “1813: Napoleon’s Nemesis” is the second volume of a projected series of games at the same scale (the first being "The Invasion of Russia (1812)"), covering all the major campaign of the Napoleonic Wars at a strategic level.?