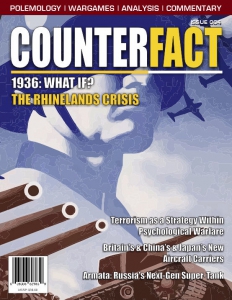 Terrorism as a Strategy Within Psychological Warfare by Joseph Miranda

- China Has Won the "Battle of the Nine-Dash Line"

- The US Army's "Cheetah" Robot

Historically, the French refrained from intervening to block Hitler's 1936 remilitarization of the Rhineland. Their cabinet made that decision based on a report from the Finance Ministry stating the cost of such a move would force them to take the franc off the gold standard and let it float. When the US and British governments, along with those two nations banking industries, declined to extend the line of credit that would have been needed in order to head off such a potentially panic-inducing economic development, the French decided they couldn't afford to act. The alternative outcome examined here, then, is based on the idea the French either got the loan they needed, or perhaps simply decided the Nazi regime in Germany represented too large a threat to the future of their own republic for it to be allowed to go on unchecked.

More particularly, the scenario starts with the French having mobilized and marched across the Rhineland, stopping at the river. (Historically, the German forces involved in the remilitarization moved across the Rhine bridges with orders to turn about and withdraw immediately if the French advanced.) The further idea is that, within a few hours or days of the French advance, Hitler and his cronies are either dead, jailed or in hiding, due to a Putsch headed by elements within the German military high command. The Nazi Party breaks into factions and starts to war against itself, or simply falls apart into political incoherency. The concentration caps are soon opened by riots among the prisoners within, or perhaps are liberated by angry mobs from without. Either way, the upshot is that all the earlier-imprisoned leaders of Germany's left-wing parties are suddenly back on the political stage.

In Moscow, Stalin quickly comes to understand the opportunity -- likely to be brief -- being presented to him. He announces to the Supreme Soviet the era of "Socialism in One Country" has ended just as suddenly as it began. The time has instead come to forge the iron of international revolution while it is newly hot. "On to Berlin and Socialist World Revolution!" becomes the new slogan of the day. Of course, the Poles resist the effort of the Red Army to cut through their country on its way west.

Thus, within a month or so after their initial intervention, the French must reconcile themselves to the fact that, having come in for a sou they are now irretrievably in for a franc. As the German army begins to fall apart into warring camps (the "Reds" and the "Nationalists"), Paris sends forward its ponderous Rhineland Army Group “ this time headed for Berlin “ there to create a dictat settlement with a new German government of French choosing.

The orders of battle for all participants in the game are accurate as to their historic composition in the early spring of 1936. The only Soviet corps left out are the one they then had in the Trans-Caucasus and the two in the Far East. Further, the Red Army purges has not yet begun, so three large mechanized corps are available, along with he world's first paratroop unit as well as its largest cavalry arm.

The first three panzer divisions (all with only Mark I Panzers) start in their countryside training areas, as does the experimental 4th Assault Gun Brigade, which was then dedicated solely to infantry support. The dozen German infantry corps, all of which had historically just completed a rushed year of training (literally and figuratively conducted at "double-time" over the normal two-year cycle), after Hitler's nullification of the army size limit set by Versailles, are in their Wehrkreis mobilization centers. War and civil war have come early to Germany.