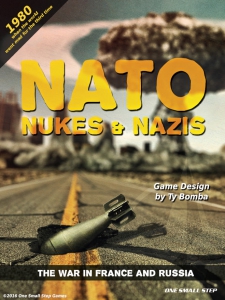 The successor to XTR's classic NATO, Nukes, and Nazis, this new version is a "What If" two-map mini-monster wargame set during the late-1980s in an alternative universe in which the Nazi regime survived World War II and is set to start World War III.

Here is designer Ty Bomba's introduction to the game:

The genesis of this game came about in the May 1979 (no. 44) issue of Moves magazine, when Richard Berg quit his job at old-SPI because he couldn't get any of his new game design proposals through their feedback voting system. Since I was the guy who, a few years prior, had given them the idea of selecting their games in that way, I couldn't help but be amused.

At any rate, Richard lamented he'd been told the only titles making the voting cutoff had either "NATO, nukes or Nazis" central in their play. He therefore intuited the most hotly sought after game of all time would be one that prominently included all three of those elements.

I carried that idea around in my head until 1990 when--whole cloth--the required generating conditions for such a scenario jumped to the forward edge of my consciousness. As things were that year, I was already involved in so many other projects I didn't have the time to do more than write the alternative history narrative that set the stage. Then, in conversation with Joseph Miranda, it quickly became obvious he got it in the full sense of that phrase. He accepted the design assignment, and the result was a game that has lived in both fame and infamy ever since.

Now the time has come around for me to take my whack at it. This isn't in anyway to repudiate Joseph's earlier effort--I was delighted by it then and still am today. This is about me having a whack at it.

Each turn of play equals half a week of real time. Each hexagon on both maps represents 20 miles (32.5 km) from side to opposite side. The system is based around the central idea that large First World armies (as well as those from elsewhere that have been trained and equipped to try to perform like First World armies) almost always begin major wars seemingly well prepared. Unfortunately for those in their front-line units, both the training and equipment usually only make them ready for the previous war, not the one they're about to fight. Beyond that, the initial period of such wars is characterized by only a partially abandoned peacetime psychology among the officers and enlisted. That is, no one as yet appreciates what it means operatively to be in an all-out war. All that comes together to give overall performance high-risk, volatile and fragile qualities: no one as yet really knows what's actually possible or wise to try to accomplish. Seemingly powerful units therefore easily become "disrupted"--especially as gauged in relation to similar units' performances later, after everyone's been thoroughly schooled in the art of war as it exists in the present. The system therefore doesn't play--when looked at on a step by step basis--in a way common to division-level simulations. The whole thing has a "Go" like quality to it. The commander will succeed best who--rather than reacting to or launching operations opportunistically one at a time--plans his campaign and then campaigns on that plan. Of course, we all know it's also true "no plan survives first contact with the enemy." So, even as you plan, you must do so while leaving within your overall scheme at least some capacity for opportunism. Strategy is not simple; it is complex.

The initiating change to history behind this game is as follows. Early in the spring of 1943, one of the historically failed assassination plots attempted against Hitler during that period actually succeeded. In short, that allowed the German high command to go over to a fully rationalized defense at the strategic, operational and tactical levels. Long story short: the Third Reich survived WW2 in truncated form (see the maps). The new rulers in Berlin soon thereafter set in place their own "Warsaw Pact," an alliance among Germany, the Baltic republics, Belarus, Ukraine, and the Balkan countries north of Greece. The Allies reacted by creating NATO, which rump-Russia eagerly joined. By 1980, the same kind of rot that afflicted the USSR in our timeline began to set in within the Third Reich. Here, though, instead of initiating a German version of Perestroika and Glasnost, those ruling in Berlin decided to roll the dice on one all-out and final war for global domination. This game presents that war (or at least the two main theaters within it).

The components to a complete boxed game of NNN2 include rules, two map-sheets, and three sheets of die-cut counters (also called "units" and "unit counters"). Dice and charts and tables are also included.