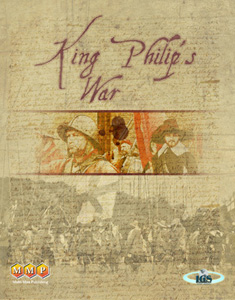 King Philip’s War 1675-1676 was a momentous example of New England frontier savagery. A loose coalition of angry tribes inspired by King Philip (the Wampanoag sachem, Metacomet) burned and sacked settlements throughout the colonies of Massachusettes, Rhode Island, Connecticut, and the then separate colony of Plymouth. Ultimately, more than 2600 Colonials were captured or killed, Twelve Colonial settlements were completely destroyed and six more heavily damaged. Boston itself very nearly came under attack. At the same time, countless Indian villages were burned and 6000 Indians were slain or captured, and sold into slavery.. In all, 1,200 homes were burned, and vast stores of food destroyed. Metacomet himself was eventually ambushed, beheaded, and quartered.

King Philip’s War can be played in five turns (introductory level) or ten turns, once concepts are fully understood. Each turn will vary in length depending on the uncertain arrival of Indian Allies. Game length between experienced gamers is 1.5 to 3 hours.

Fog of war is introduced in the form of a unique Battle Effects Die that simulates six unexpected possibilities, one of which could affect every combat. Such unexpected events include ambushes, spies, defender reinforcements, massacres, defender panic, and the introduction of Indian Guides. Tribal support is gained through a simple diplomacy phase for both sides. Combat success often means the destruction of enemy villages and settlements, which in turn erodes the loyalty of friendly tribes.

* King Philip or Metacomet, Sachem of the Wampanoag Nation

* Benjamin Church, purported founder of the colonial rangers and

Adam Starkweather will also be happy to answer any questions about the game on BGG as well as on www.consimworld.com.