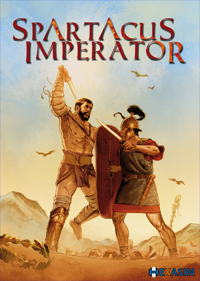 Smash your chains and fight for your liberty ! Taking the places of Spartacus (-73 to -71), Tryphon (-104 to -101) or Eunus (-139 to -132), during the three Servile Wars which shook the Roman Empire, defy the Roman Consuls (Crassus, Pompey and others) by liberating slaves, ravaging the countryside and pillaging cities in the heart of Italy. Recruit your armies amongst the enslaved warrior tribes of the Gauls, the Dacians, the Germans, the Syrians and the Thracians. Increase your forces tenfold as swiftly as possible before Rome sends its best legions to re-establish the Pax Romana. Only your genius and your knowledge of war can save you and allow you to found a kingdom of former slaves. But be careful, for Roman strategists are watchful, and are taking the new menace more and more seriously. You must conquer or perish … on the cross !
Imperator: for the Romans the word signified a victorious general, and was an honorific title. The nearest term today is marshal, rather than emperor. Declaring Spartacus to be Imperator was an out and out provocation to Roman military nobility which sought honour above all !
Spartacus Imperator is a simple, fast playing game. A game can be played to completion in an hour. It is aimed at those who have little time for gaming, or who wish to introduce new players to the hobby.

At the beginning of a season, action points are allotted to each general. With these, they may move, pillage, recruit or employ strategems. Each leader is independent and will refuse to share his troops and his booty with his own side because the rebel leaders are divided and the Romans seek only glory for themselves.

Pay attention to managing of the armies on the narrow map of Italy! 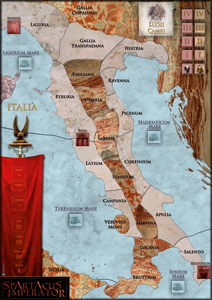 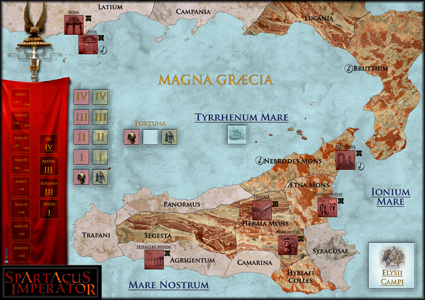 Each clash is played out on a battlefield, simulated by a specific play aid. The leader uses his tactical value to limit the role of risk. The rebel forces are not known to the roman Player before the attack. Each player secretly chooses a tactic which will influence the course of combat. For example, a leader can place his best troops in the front line or hold them back for the last stages or try to surround his enemy on the flanks.

In the case of a siege of a city, the besieger may attempts frontal assaults or harass the enemy lines. However, the besieged can also attempt bloody sorties or benefit from the protection of their walls.

To limit risk, the best historical generals benefit from opportunities to influence fate. Nevertheless, the best player will always take the victory thanks to his mastery of the art of war. 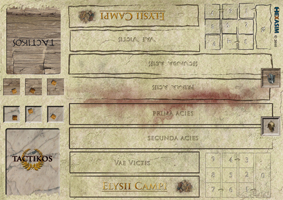 Booty is captured by ravaging regions and cities and from the defeated on the field of battle. It is used to restore the wounded and to recruit

The goddess Fortuna favours the recruitment of the player who most recently won on the field of battle.

Each stratagem corresponds to a historical event. It is a kind of joker represented by a card altering the course of battle, the destiny of a general or a stroke of fate. These are limited in number for each side and for each Scenario.

Each Scenario has its stratagems, its leaders, and its specific troops. A Scenario can be finished very quickly if the rebellion is nipped in the bud or can last up to 90 minutes.

Scenario I : Spartacus -73
At the head of a few dozen gladiators, Spartacus routed the Roman militia thanks to a stratagem. As a result of this success, his army attracted many escaped slaves. However, dissensions arose, Crixus the Gaul left with part of the army. Rome sent praetors who are defeated, then in the following year, consuls. Will Spartacus chose to flee via Massilia or about-turn and head to Sicily or devastate all Italy as proposed by Crixus to free all the slaves? In any case, if it were done it were better done quickly, for Pompey returns from Spain and the wealthy Crassus raises 8 legions at Rome. It is up to you to take in hand the destiny of the rebels or of Rome. This Scenario is a real challenge as the victory conditions change every year!

Scenario II : Tryphon -104
While the Cimbrii and the Teutons devastate Gaul and defeat two armies of legionaries, the revolt rumbles on in the Republic. In Campania, a member of the equestrian order overwhelmed with debts kills the magistrate in charge of taxation, arms his slaves and marches on Rome. At the same time, in Sicily a law grants liberty to former prisoners of war who have been enslaved because Rome needs fresh troops. When thousands of them appear before the Governor to claim their liberty, the great landowners disregard the law. The next day, all the island rises in revolt! Will you manage to build a slave kingdom in Sicily before Marius defeats the Cimbrii and the Teutons? Or will you be able to reform the Roman army before sending it to reconquer Sicily? This Scenario introduces the siege rules and shows the evolution of the legions by Marius.

Scenario III : Antiochus -139
Rome is in a serious crisis. In Sicily, two slave revolts worstened, in a short time, two armies were formed and took control of Roman cities. Rome hoped that the rebels would start a fratricidal war. In fact, one rebel leader accepted the supremacy of the other, a slave kingdom was born. Will the Romans take less than 9 years to crush this revolt or will the slave realm endure? This Scenario is the longest in duration and uses a large number of generals.