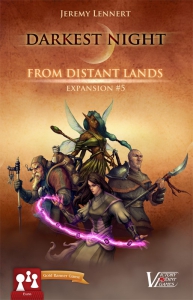 From Distant Lands bundles together four promotional items for Darkest Night: The Nymph promo; the Enchanter promo; the Mercenary promo; and the Tinker promo.

They say that moments of crisis bring out both the best and worst in people. We have seen parents abandon their families, brother selling out brother, and opportunists looting all over the kingdom. But we have also seen brave people smuggling supplies out of danger, good folk giving their lives to protect their loved ones, and simple farmers preserving vital secrets even under torture.

Help comes from unexpected places. A ruthless mercenary now fights loyally at our side, though there is no one to pay him. A nymph comes to our aid; I thought her kind no longer existed. These are not the heroes I would have expected, but the Necromancer's reign would do them no favors. I suppose needs must when the devil drives...

In total, this promo pack includes four new playable heroes (each with their own unique deck of power cards), four event cards, and four artifact cards, and is compatible with all released expansions.