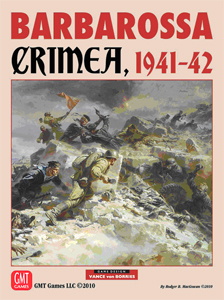 GMT is proud to present Vance von Borries’ sixth epic game in his award winning series of East Front games, Barbarossa: Crimea. This is a two-player operational level game depicting the battles in the Crimean peninsula of the Soviet Union during 1941 and 1942. Beginning in mid-October 1941 and ending in January 1942, it completes the year 1941 in this series of the German invasion of the Soviet Union. And it includes 1942 scenarios of the continued fighting in Crimea until the historical fall of the great Soviet naval fortress Sevastopol in July 1942.

* Various player aid cards for charts and tables in color

* Set up cards for each scenario in color