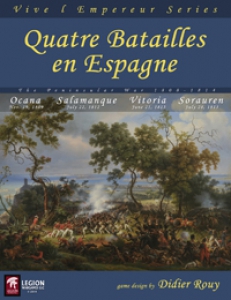 Vive l'Empereur Series is a simulation of the battles fought during the Napoleonic Era in Europe, between 1805 and 1815. The scale is the regiment, a good compromise between the brigade level (with no formations) and the detailed battalions. The scale is 250 m/hex and a turn is 30 minutes.

Vitoria, fought on June 21, 1813, was one of the most decisive battles of the Peninsular War. It was the last major battle between the allied British, Portuguese and Spanish forces and the French armies, and opened the way for the invasion of France. It opposed 60,000 French soldiers commanded by King Joseph to 80,000 allies superbly trained and equipped attacking on three sides. Looking like a one-sided battle, things are far from obvious for the Allies and many what-ifs make the situation very interesting.

Ocaña, fought on 19 November 1809 was a major Spanish defeat that ended any chance of success in the Spanish Junta’s autumn campaign of 1809. The largest Spanish army under general Areizaga, more than 55,000 men, moved toward Madrid but allowed Marshal Soult and King Joseph to concentrate around 30,000 men. A brutal clash occurred at Ocaña, and a French cavalry movement on the flank rolled the Spanish line.

Salamanca, fought on 22 July 1812, was a turning point in 1812. The battle saw the Anglo-Portuguese army under the Duke of Wellington defeat Marshal Marmont's French forces among the hills around Arapiles, south of Salamanca. Both armies, 50,000 men each, have been marching and countermarching for days trying to outflank each other. Wellington eventually caught the French in an over-extended position and struck at the center. A very well balanced battle, where a better concentration gave the advantage to Wellington.

Sorauren is the last battle of the counteroffensive by Soult’s reorganized army of Spain in July 1813. It was part of a series of engagements in late July 1813 called the Battle of the Pyrenees in which a combined British and Portuguese force under Sir Arthur Wellesley held off Marshal Soult's French forces attempting to relieve Pamplona. Attacking a thin red line in a very good defensive position, the French were eventually pushed back, but the battle could have turned very differently.