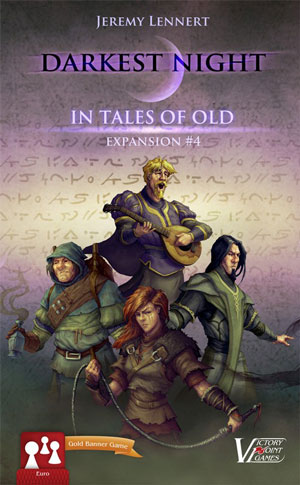 This newcomer fancies himself a historian; always telling stories about how our people used to live, or how some great hero from the past would deal with the crisis of the hour. It seems silly to say, but it makes the horrors around us seem more manageable; like we've beaten them before. The victory that recently seemed hopeless has become conceivable.

I wonder how much truth there is in these fables. Could anyone really fabricate wondrous items like we hear about in legends? Command wild animals to do their bidding? Craft servants out of light and shadow? I've never seen such things, but I've heard of them, in tales of old...

In Tales of Old, the fourth expansion to Jeremy Lennert's Darkest Night, sends your heroes racing across the kingdom to unravel the mysteries of the holy relics' resting places.

Instead of searching for keys, you now draw Mystery cards that reveal how to obtain clues to the relic's location, and perhaps some other rewards. These mysteries may lead you to explore the depths of ancient catacombs teeming with traps, or encounter an antique trader willing to part with old scrolls for the right price.

Gather your knowledge, courage, and strength as you uncover the kingdom's secrets in the hopes of vanquishing darkness once and for all...