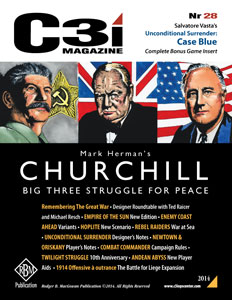 Highlights from C3i Magazine Nr28 (this is not a complete table of contents):

Unconditional Surrender! Case Blue is a 2-player game covering the World War II military campaigns fought in southern Russia from mid-1942 to early 1943. One side controls the armies and air forces of the Axis, while the other side controls those of the Soviet Union. Using simple mechanics, players focus on the strategic action. Armies move and fight in an integrated movement/combat activation system. Air wings suffer reduced effectiveness based on their level of activity. And all force action and replacements are dependent on basic production system. – By Game Designer Salvatore Vasta

Unconditional Surrender! Case Blue is derived from the boxed game Unconditional Surrender! World War 2 in Europe, published by GMT Games. That game covers the entire war in the European Theater using the mechanics found in USCB with the addition of other elements, such as naval units, strategic warfare, diplomacy, ULTRA, airdrops, Free Forces, etc.

What if? – In World War II, what if the Germans had decided to rebuild the High Seas Fleet or expanded their Rockets program? What if the Italians had built a carrier force? What if the Russians traded fighters for bombers or tanks for ships? What if the UK or USA mobilized more ground forces, but less air and naval assets? What if other countries from as small as Belgium to as large as Spain or Turkey were better prepared militarily?

Now you can explore these hypothetical situations with Unconditional Surrender! World War 2 in Europe. The boxed game provided the counters; now C3i Magazine Nr28 provides you with the rules to incorporate them into your campaigns. – By Game Designer Salvatore Vasta

Two award-winning game designers share why the Great War resonates with them and continues to hold lessons for us one hundred years later. – By Sam Sheikh

The First Battle of Mantinea, 418 BC

By Game Designer Dan A. Fournie

A major variant for Andean Abyss, with expanded C3i Play Aid Inserts and design notes: "Father of Bots" Örjan Ariander brings Volume I of the COIN Series up to current standard by adding a Non-Player for the Colombian Government, as well as refining performance of the three existing Insurgent Non-Players based the past two years of post-publication experience. Solitaire as the FARC, AUC paramilitaries, or Cartels for the first time! – By Örjan Ariander

C3i Sorpe Variant – Enemy Coast Ahead: An exclusive variant for Enemy Coast Ahead, including two new counters. Busting Sorpe Dam was nigh impossible for 617 Squadron, and this variant offers even greater detail allowing players to understand just how tough of a demolitions problem it was. – By Game Designer Jeremy White

Twilight Struggle at 10: An interview with Game Designers Ananda Gupta and Jason Matthews

Groupies, foxy astronauts, and evil new plans–-meet Ananda and Jason, International Men of History in the pages of C3i Magazine – By Sam Sheikh

Sam I Am; who you are tells the story!

The New Countersheet included with C3i Magazine Nr28 includes full color counters for such games as: