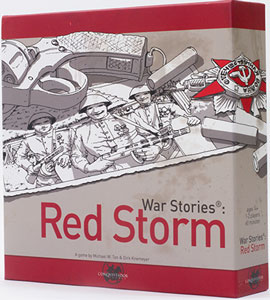 Red Storm depicts the Eastern Front - the Soviets against Germany - during 1942 and 1943. Most of the fronts are represented with the exception of urban warfare such as Stalingrad. At the beginning of this period the Germans have better units and equipment while the Soviets rely more on quantity. However, as the Soviets get more experienced their units improve in valor and begin augmenting their impressive quantity with exceptional quality.