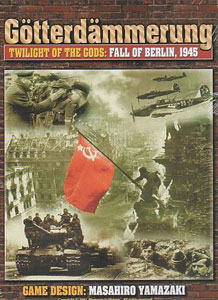 BERLIN 1945—CITY UNDER SIEGE: At left is the operational map of Berlin; units entering city hexes move immediately to action on the tactical urban map—from whence they do not exit until the city falls or Festung Berlin lives on.

The detail of the street-level 'Siege' map is incredible, with clearly marked landmarks familiar to every student of the Battle of Berlin.

Gotterdammerung is really two games in one: an operational level game of the entire front and a tactical-level simulation of the block-by-block fight that led to the very steps of the Fuhrerbunker.

The counters are designed to be functional and easy-to-read and depict all the German Wehrmacht, Waffen SS, Volksturm, Luftwaffe and Kampfgruppe formations as well as Soviet and American units.