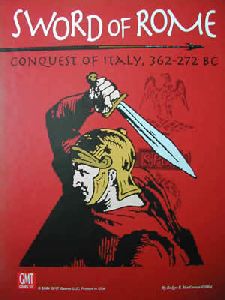 Rome began the 4th century BC as no more than the leading city of a small league of Latin communities and ended it controlling all of Italy and on the doorstep to Western preeminence.

The Sword of Rome is the latest in GMT Games' acclaimed line of Card-Driven Games (CDG). The game enables up to four players to recreate the climatic struggles among the peoples of Italy and Sicily, Romans, or Gauls will dominate the western Mediterranean and with it earn the right to vie for control of the known world?

Through a unique adaptation of the event-card system, players can also take on the roles of additional contenders such as Gallic tribes from across the Alps or the mighty naval power of Carthage. You will command the great figures of the age: Rome's military savior Marcus Furius Camillus; Syracusan tyrant Agathocles, who dared to assault Carthage itself; or Pyrrhus of Epirus, the adventurer king who sought to unite the western Greeks.

Each player has their own customized deck of strategy cards containing a total of 152 events that lend specific flavor and personality to the different factions. Additionally, each faction also has special powers that emphasize its historic strengths

* The Romans can create new colonies, improving the defense of their budding empire and increasing their manpower through diplomatic assimilation of the local peoples.

* The Etruscans may utilize their great wealth to bribe greedy foreign leaders to avoid battles they would rather not have to fight, while the Samnites can use the paths among their mountain homelands against invading enemies.

* The Greeks have outstanding mercenary forces at their disposal, but at the cost of diminishing loyalty of their colonies as their generals seek to establish their own little kingdoms

* The Gauls can move swiftly and claim victory in unexpected ways while raiding and plundering their enemies' strongholds.

Two, three, or four players may test their diplomatic and military acumen in this game that combines the familiar strategy card driven system originally created by Mark Herman, with a number of innovative new twists.