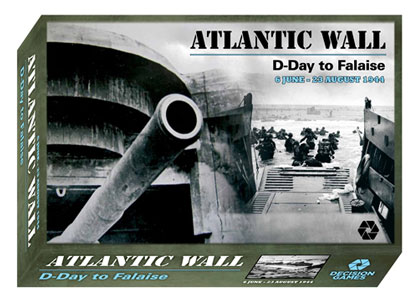 ON 6 JUNE 1944 the greatest armada the world has ever seen approached northern France. That fleet consisted of more than 5,300 ships carrying over 300,000 men and 50,000 vehicles. Opposing them was Germany’s veteran Wehrmacht.

ATLANTIC WALL is a grand-tactical simulation of that campaign. The counters represent almost every formation that participated at the company and battalion level. Infantry, armor, anti-tank, reconnaissance, engineer, assault gun, howitzer, rocket, parachute, ranger, commando, glider and headquarter units are fully represented. Features include Widerstandnesten (resistance nests), Cherbourg’s fortifications and the all-important Bocage. The map portrays all primary and secondary roads, trails and other types of terrain, along with the villages, towns and cities that formed the bastions of German defense. As always with this series, the orders of battle have been extensively researched to provide an accurate and functional depiction of the armies of both sides.

There are three introductory one-map scenarios depicting critical periods in the campaign that use an abbreviated set of rules while still maintaining the historical accuracy of the campaign game as a whole. In addition, there are three larger multi-map scenarios that allow players to either play a short period within the overall campaign or play the campaign from various starting points. The 6 June assault is covered in two modules, the Airborne Assault Module and the Amphibious Assault module, which allow players to recreate both the airborne and initial amphibious assault stage of the campaign. The Amphibious Assault Module is played on a special Beach Display that shows each sub-area of the invasion beaches with units depicted at the company level. It can be played as a solitaire scenario. The campaign game can be played from 6 June to 22 August, with a total of 234 game turns.

This is the third installment of the Grand Operational Simulation Series (GOSS), the first two being: Wacht am Rhein and Hurtgen: Hells Forest. All three games share a common rules set that’s been extensively updated and revised to simplify game functions while still maintaining the design of the earlier games. In addition to the basic rules, Atlantic Wall includes a set of exclusive rules to cover the special requirements of the amphibious and airborne landings and the logistical system required to support the armies coming ashore.