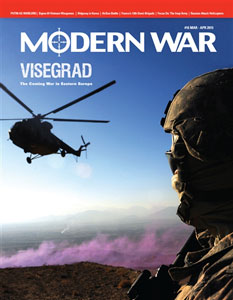 Visegrad: The Coming War in Eastern Europe covers a hypothetical conflict between the forces of the Eastern NATO and Russia. With the US in retreat in the world, and the Russians getting overly aggressive, it could be that a resurgent Russia could make an attempt to take back its classic sphere of influence. This, factored in with the fact that Russia is the primary energy source for much of Europe, has made them overly powerful. The biggest threat to the Russian energy dominance is amazingly the country of Poland. Recent technological breakthrough in ‘Fracking’ has made the Polish shale resources the number one competitor to Russian energy domination. So, once again, the two nations may well be on a collision course to destiny.

The other assumption made for the background of the game is that Germany, caught in the grips of an isolationist government, and not willing to risk rocking the boat with its primary source of energy, declares Poland the aggressor and that it will be neutral in the NATO “violation”. The US, already weakened from its own internal problems, is unable to force them to honor their commitments. The resulting chaos and confusion will delay the entry of much of the NATO forces and force Poland and its neighbors to go it alone.

Putin as Warlord – Alt Newsstand Cover Article: A warlord is a supreme leader who exercises military and civil control over a large geographic area due to the presence of armed forces loyal to him rather than to any other authority.

AirSea Battle: On 12 May 2013 the US Department of Defense officially announced the establishment of the “AirSea Battle concept.”

Matthew Bunker Ridgway – The First Cold War General: In Korea, Gen. Matthew Ridgway not only exhibited a new style of personal leadership, he also adapted to the demands made on generals in the Cold War era by showing he was able to plan and fight a “limited war.”

Sigma 64: Ignored Vietnam Wargames: Trying to predict the future of military operations was a major concern of President Lyndon Johnson.