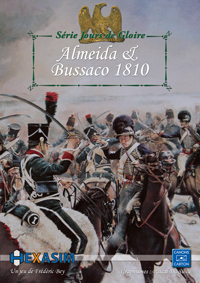 In April 1810, Napoléon entrusted to Masséna, the hero of Aspern and Wagram, the mission of driving Wellington out of Portugal. The northerly route was chosen for the invasion, passing through Ciudad Rodrigo and Almeida. The French offensive began at the end of June.
On 24 July, Marshal Ney with the advance guard defeated General Craufurd under the walls of Almeida and threw him back across the Coâ River, as a prelude to laying siege to the place. The French then penetrated into Portugal. Their advance was slow and difficult.
As for Wellington, he drew up his army in the formidable position of Bussaco. On 27 September, Masséna ordered a frontal attack upon the English line of defense. After a bitter struggle he gave up the attempt and broke off the attack. It would take until the next day to find a way to turn the position at Sierra de Bussaco. With these two battles the terrible duel between Masséna and Wellington had begun!

Almeida and Bussaco 1810 is a new offering in the Jours de Gloire series. It presents 3 battles of the year 1810 between the French and Anglo-Portuguese armies.

The Battle of the River Côa (Almeida), June 24, 1810. Ney had been ordered by Masséna to capture the fortress of Almeida. To accomplish this, the Duke of Elchingen would first have to defeat the British force covering the town. 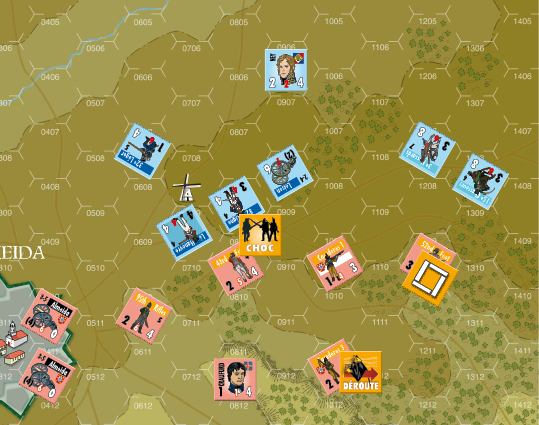 In the shadow of the fortress of Almeida, Crauford’s division gave way under the assaults of the French VI Corps.

Next, the Battle of Bussaco, which took place on September 27, 1810. The Anglo-Portuguese army of the Duke of Wellington was firmly established on the heights of the Sierra Bussaco. 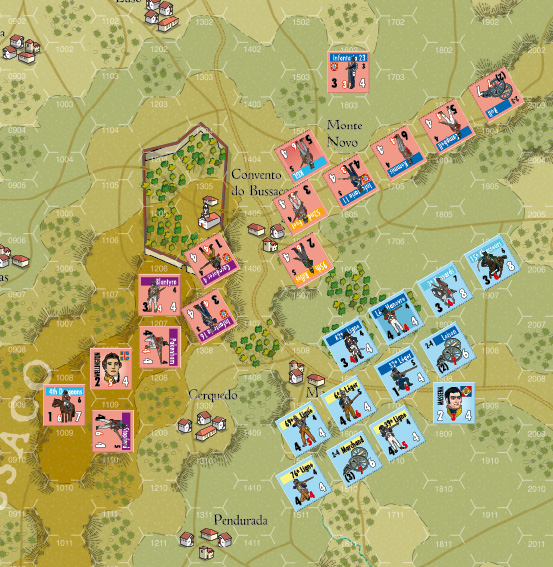 Early in the morning, the French right wing launched an assault on the British positions near the convent of Bussaco.

Finally, the engagement of Coimbra. On October 1, 1810, the advance guard of the Army of Portugal, commanded by Cavalry General Sainte Croix encountered the allied army’s rear guard under General Stapleton-Cotton.

Each battle includes a historical scenario and one or two alternate (“what if?”) scenarios (for example: what if Picton’s division had arrived on the battlefield of Almeida?). There are 7 scenarios in all.

The objective of the Jours de Gloire series is to cover the principal battles of the Napoleonic epoch chronologically, publishing them on their bicentennials. The battles covered range from small engagements to large battles, simulated at scales varying from battalion to brigade. Playing time varies from 1 hour for the smallest battles to 15 hours for the largest.

The rules are based on the activation of formations from each army by randomly drawing Activation Markers. Each player, standing in the shoes of the commander-in-chief, has at his disposal a limited number of orders; for this reason he must manage the priorities of his plan of battle.

The game integrates unit facing and the main formations or dispositions of troops for combat: forming square, cavalry charges and artillery fire.

Each battle has specific rules which add to the standard rules, notably via special activation markers, so as to provide optimally for the context of each battle.

The Jours de Gloire series supports the Trophée du Bicentenaire (Bicentennial Trophy), an international wargaming competition held each year since 1998. As a result, more than 1800 games have been played using the series.
The 14th Trophée du Bicentenaire will take place on January 8-9, 2011, in the prestigious surroundings of the main meeting-room of the Town Hall of Vanves, in the Paris area.
The competition will be organized around Almeida and Bussaco 1810. Will you dare to take up the challenge?
To sign up, go to Frédéric Bey's website...