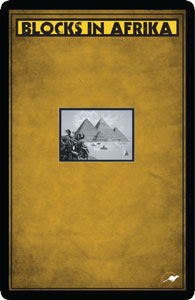 The BLOCKS IN AFRIKA Card Deck, included in the BIA Limited Edition, is a special deck of 12 Event card. They report the most important special rule for the game, such as the "Turkey Joins Axis", "Italy declares War", the "AFRIKA KORPS"...