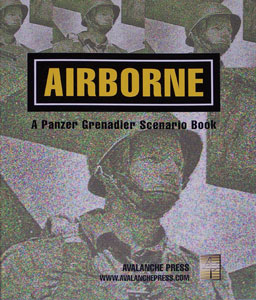 Floating down from the dark early-morning skies of Normandy, American soldiers taught the world a new synonym for courage: Airborne. Landing on 6 June 1944, these paratroopers would fight for the next 33 days and go on to represent their country in the victory parade through the ruins of Berlin.

Airborne is a book supplement for the Panzer Grenadier series. It contains 35 scenarios set in the Normandy countryside: 20 of them from the long-out-of-print boxed game, 14 new ones by Mike Perryman, and one mega-scenario by Patrick Callahan. Plus the usual background material.

Airborne includes a mapboard, but no playing pieces. Players will need playing pieces and some maps from Elsenborn Ridge and Battle of the Bulge; a few scenarios also use boards or pieces from 1940 - The Fall of France and Edelweiss.