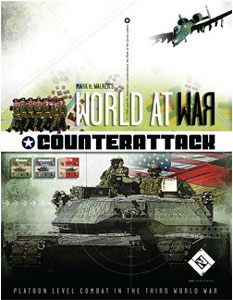 World at War: Counterattack - A scenario expansion pack for Blood and Bridges and Into the Breach.

World at War: Counterattack recreates the American and West German counterattack into the southern flank of the Soviet thrust into West Germany. The battles occurred just after the events chronicled in Blood and Bridges, and prior to the final battles for Paris.

Nine scenarios comprise the module. Four are stand alone, another three make up one campaign, and four more build the second campaign (two of the campaign scenarios can also be played as stand-alone battles). See below for additional details on the scenarios.

The module uses a similar campaign system as the one that we employed in Battles within Battles. Winning scenarios awards the player with refit points, these points can be used to repair damaged units, buy new units, or buy unique skills for your units and leaders The system rewards the gamer who conserves his forces. Win the scenario, but decimate your forces, and you’ll lose the war…. Or at least this small piece of it.

9 counters (die-cut counters, if you choose the professionally printed option)

The Campaigns and Scenarios

Counterattack's two campaigns are comprised of several scenarios with a running storyline. The campaign focuses on two groups of Americans--Task Force Eagle, led by Captain Matt Steckler, and Slaughter's Slammers (A-1/8 Infantry and Echo Company) led by Major Jack Slaughter. The campaign battles are fought in a variety of locales. Two are set on a new, and included, 8.5” x 11” map, and the rest occur on various locations on the Blood and Bridges map. They are persistent campaign,s meaning that the losses you suffer must be either made good with replacements and refit, or lost forever. Depending on how you do in each scenario, you are rewarded refit points. These points can be used to refit reduced platoons, buy additional forces and weapons such as Abrams, Bradley's, and Dragons.

Additionally, refit points can be used to buy skills, such as Augmented Firepower, Split Fire, Aid Station and Moral Boost, and others. These skills enhance a platoon’s capabilities. For example, the Split Fire skill allows Klaiber’s M-1 platoon to split its fire between two targets. The portable Aid Station allows an infantry platoon to ignore the first hit against it each turn. Augmented Firepower enables the owner to re-roll one of its attack die. There are six skills in all, and only the best commanders will accumulate the refit points needed to buy them. And only with grit and determination can the Americans complete their missions.

Dial 411 for Information: A small but powerful American task force most locate and rescue a group of valuable prisoners.

One Thing at a Time: A troop of Sheridans with heavy artillery support ambushes a column of Russian armor. Everything is going great until more Russians arrive on the scene.

Just Passing Through (Slammers #1): Americans must make a breach in the Soviet lines west of the Rhine, which West German Panzers and Panzergrenadiers will exploit. Unique victory objectives for each force. Great three-player scenario.

Little Red Riding Hood (Steckler #1): The prisoners rescued in Dial 411 tell an improbably tale of packs of wolves and renegade Soviet infantrymen. Steckler and Task Force Eagle are ordered to a remote location (new map) to discover the truth.

Crossroads (Slammers #2): Major Jack Slaughter and his Slammers are tasked with relieving an American air assault force holding a key crossroads in the flank of the Soviet salient.

The Kitchen Sink (Steckler #2): Task Force Eagle found the farmhouse described by the prisoners, but now they must hold it against random attacks from all sides. It’s a seemingly hopeless task, but a company of Panzergrenadiers arrives in a nick of time. Can be played three-player or with the game partially controlling the Germans.

Hard Rain (Slammers #3): With success after success the American counterattack continues to roll up the Soviet flank. The Americans are poised for a final attack on Faulbach when a freakish storm strikes, limiting visibility, and degrading electronics… and then the Soviets attack.

Rest and Recovery (Steckler #3): Battered and bruised, Steckler’s men look forward to some rest in Dattenburg, but then Soviet parachutes dot the sky, and Steckler realizes the war has found them again. Soviets execute an parachute drop, with a platoon of ASU-85 no less.

Run For Your Lives (Slammers #4): Surrounded by the Soviet counter-counterattack, Slaughter’s Slammers must weave their way through a myriad of Soviet forces, fighting when they must, dodging when they can, darkness their only friend.