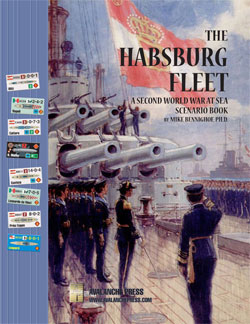 After three years of terrible warfare, the Great War came to an end in January 1917 thanks to the mediation of American President Woodrow Wilson. War returned in 1940.

The Habsburg Fleet is the second book in our alternative history series, The Second Great War. In the first book, The Kaiser’s Navy, we looked at the High Seas Fleet of 1940 and its campaigns in the North Sea and Atlantic. In this new book, the Imperial and Royal Austro-Hungarian Navy, alongside its Turkish allies, wages war in the Mediterranean Sea.

There are 210 die-cut and mounted playing pieces from the old, out-of-print Imperial & Royal Navy booklet, and 75 brand-new laser-cut pieces (scorchless and sootless!) for 285 total: 135 double-sized "long" ship pieces and 150 standard-sized ones representing task forces, aircraft and smaller warships. The Austro-Hungarian fleet that never was is present, along with French, British, Greek, Italian, German and Turkish ships, aircraft and airships.

There are also thirty new scenarios based on the battles that might have been waged on the Mediterranean Sea in this alternate world, plus more of the story of the Second Great War begun in The Kaiser's Navy. This module is not playable by itself, but requires ownership of Bomb Alley and Black Sea Fleets to enjoy all of the scenarios.