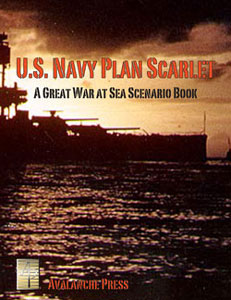 In the early decades of the 20th century, the U.S. Navy made plans to fight many potential enemies. Plan Red, the strategy for war with Britain, included sub-plans for conflict with British Dominions. War with Australia, code-named Plan Scarlet, would be a purely naval affair.

U.S. Navy Plan Scarlet is a 64-page book supplement to the Great War at Sea series, focusing on the battles that could have taken place in the Central Pacific.

There are 25 scenarios, or separate game situations, based on battles that could have taken place under various nations' war plans: Australian raiders threatening American supply lines, Japanese moves against Australian-held ports, a Japanese forward strategy, and much more. And of course the thorough background articles you've come to expect from our supplements.

This module is not playable by itself, but requires ownership of Pacific Crossroad, Jutland, Cruiser Warfare, U.S. Navy Plan Red andBlack Waters to play most of the scenarios, and U.S. Navy Plan Gold and Remember the Maine to enjoy them all.