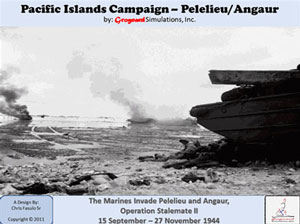 Pacific Islands Campaign - Pelelieu/Angaur is the fourth title in the series and moves closer to the Philippines and has the Marines and Army working together again. The Army invaded the small island of Angaur on 17 September 1943 and secured the island pretty fast. The Marines landed on Pelelieu on 15 September 1943 and made fair initial progress, but soon ran into the dugin Japanese at Umurbrogal mountain. This set of positions caused the Marines more trouble than they ever expected. The fight was supposed to take a couple weeks and in the end it took 2 months. And the 1st Marine Division took very heavy casualties and needed an extensive refit period and some well earned rest. The Army troops from the 81st Infantry Division had to move to Pelelieu to help the Marines and eventually would take the mission over and complete the job. The Japanese in the mountain put up resistance much more formidable than at first thought.

The US would lose over 10,000 casualties and so would the Japanese. That would make this the only battle where our casualties were equal to the enemy.