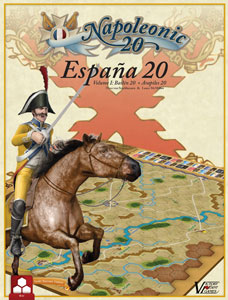 Considered one of Wellington’s finest battles, Arapiles 20 (July, 1812) from Lance McMillan focuses on the hard-fought meeting engagement between his veteran British forces and Mareschal Marmont’s French army in the hills south of Salamanca. With two armies of equal strength, victory requires careful planning, precise maneuvers, and exact timing to take advantage of the opportunities offered by unexpected events. Will the British player be able to pounce on a fleeting French blunder to win the day (as happened historically), or will the French be able to simply bludgeon his opponent into submission? In Arapiles 20, the outcome of this famous battle is in your hands.

Hans von Stockhausen's Bailén 20 (July, 1808) showcases the stunning triumph of General Francisco Castaños’ Spanish army over French General Pierre Dupont’s Corps d’Observation operating in the mountains of Andalusia. This game challenges both players: The Spanish must struggle to coordinate the actions of their large and enthusiastic but mostly untrained army, while the French must decide whether to try and hold against superior numbers or conduct a fighting withdrawal back to Madrid. With Spanish guerrillas, a baggage train full of looted treasure, and treacherous Swiss mercenaries who might change sides in the middle of the battle, Bailén 20 offers players plenty of military adventure.