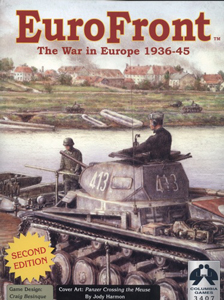 EuroFront links EastFront and WestFront together into a complete simulation of World War 2 in Europe from 1936 to 1945 (including the Spanish Civil War).

The game contains the EuroFront system rules and over 240 blocks for every European nation from Norway to Turkey. Axis and Allied versions are provided for most nations. Axis, Allied and Soviet units for the North and Mid-East fronts are also included. With the maps and blocks from EastFront and Westfront, you can now replay all of WW2 in a single weekend.

The core rules for EuroFront have not changed. There are new diplomatic and alliance effects as well as new streamlined rules for exit zones. All edge of the map rules have been revised and simplified. Exit zones are no longer required. Bordering the map are Districts and Regions with connecting road or rail lines and links to the main map.

Total playing area is 45" x 68". Ownership of EastFront and WestFront are required.