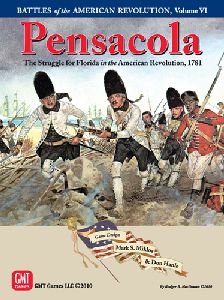 The Siege of Pensacola pits a numerically large but fragile Spanish army, supported by a small corps of French allies against a smaller, feistier British army enjoying strong fortifications and highly mobile Indian allies.As the Spanish player you will need to determine where you will build your siege gun redoubts and will then have to protect your soldiers from raiding British units to finish the works in time to mount an effective bombardment.As the British player, you have far fewer forces, but armed with special raiding rules, your Regulars, Tories and Indian allies must harass and erode Spanish morale, while delaying the construction of Spanish siege works for as long as possible in the hope of keeping your three forts intact to face the coming coup de main.