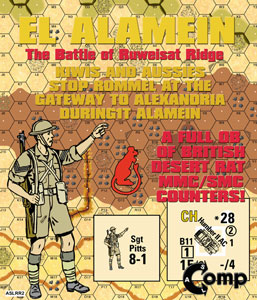 Ruweisat Ridge, EL ALAMEIN LINE, EGYPT, 15 July 1942: The Allied counterattack against his positions on and south of Ruweisat Ridge had been successful in dislodging Rommel's forces from the Ridge. Fearing a rout might develop if he lost this anchor position in his line, the Desert Fox ordered an immediate counterattack to retake Pt. 63. The Germans timed their counterattack to coincide with the setting sun. Rommel was determined to regain his hold on Point 63 before darkness fell. The fighting was furious and Axis forces suffered heavy losses in both men and their ever-dwindling armor. Rommel would regain Point 63 but the cost would rob him of any chance at pushing on to Alexandria. General Auchinleck would be relieved soon after this engagement. But he had succeeded in stopping Rommel from entering Alexandria and the Suez Canal.

The Battle of El Alamein continues to excite wargamers and for good reason. It was a unique battlefield, a departure from most of the fighting that had taken place in the Western Desert and along the Via Balbia ... to that point in the campaign. Alam Halfa ... Ruweisat Ridge .. Deir El Shein ... 'Snipe' ... Miteirya Ridge ... Kidney Ridge ... Tel el Eisa ... all historic places where the outcome between Rommel and Montgomery ... the Deutsches Afrikakorps and 'Tommy Atkins' ... was decided.

More years ago than any of us want to admit ... CH 1.0 brought you one of many designer-driven modules. The time has come to launch a multi-module exploration of the Battle of El Alamein and the place to start it again ... as Carrell said it in Foxes of the Desert, 'the war started breathing again' ... at EL ALAMEIN: THE BATTLE OF RUWEISAT RIDGE. The new module is just that: new. As in a new map with the latest map art and physical changes based on additional research. It's fully remastered. Plus new color die-cut counters.

For those that have been building a CH color die-cut counter collection ... and it is an ever expanding endeavor ... a missing nationality is filled in with EL ALAMEIN: THE BATTLE OF RUWEISAT RIDGE. We think you will agree it is HIGH TIME for Tommy Atkins ... in the form of British 8th Army MMC and SMC counters ... to make their appearance. And they duly appear, just in the nick of time. See, Rommel, 'Wolf' and everyone in his Mammut and HQ tent were already thinking about donning a crisp shirt, dress uniform ... for the victory parades through Cairo and Alexandria.

> A set of 8 scenarios set on thehistorical map