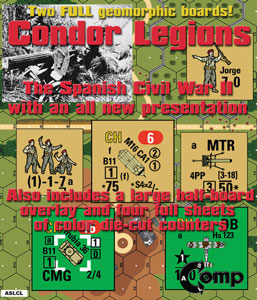 BOADILLA, SPAIN, 14 December 1936: The Civil War in Spain brought a wide variety of international volunteers and mercenaries to that troubled nation. Following upon the narrowly defeated Nationalist drive on Madrid during the Autumn, the Nationalists thought to renew a more limited offensive to complete their aim of isolating the nearby city of Madrid. The Nationalists assembled 18,000 infantry and cavalry organized into four mobile brigades, supported by elements of the German Condor Legion, and a large contingent of 155mm guns. Opposing them were the famous International Brigades, composed of left-wing dissidents, exiles, communists, and socialists. These enthusiastic volunteers were determined to stop the fascists. The brigade at Boadilla was the Thaelmann Battalion, consisting mostly of German communists and some Englishmen. The fiercely-independent ideologies of both sides promised for particularly vicious fighting. The Nationalists began the attack with the heaviest artillery bombardment of the war. The Nationalists attacked Boadilla and successfully seized it the first night. A counterattack by two of the Republican International Brigades and a detachment of Russian tanks forced the Nationalists to withdraw from the town the next morning, only to see them counterattack later that day, successfully trapping the Thaelmann Battalion inside the town. A terrible fight ensued throughout the town. Casualties were heavy for both sides as each side funneled more troops into the fighting. All Republican counterattacks to relieve the besieged comrades failed. Elements of an Russian armored detachment engaged the panzers of the Condor Legion inside the town square, while elite Spanish Moroccan Infantry fought their way into the fortified Marketplace and the nearby Castle Duque de Sueca. The Thaelmann Battalion and their Spanish and International brethren were forced to fight their way out of the town, leaving many dead behind. This costly fight left the Nationalists with a modest victory in having seized Boadilla and the surrounding territory, while both sides (especially the International Brigades) were heavily depleted in strength.

Years have gone by with requests coming in for a reprinting of GUERRA CIVIL, the Spanish Civil War historical module—you have been heard. But the request for a reprint has to be rejected. Instead, a fully remastered product, with all new counters. new geomorphic boards, scenarios laid out with the new format and art, not to mention all new color military art adorning the die-cut counters. Plus some extra scenarios and re-written Special Rules and notes pages.

> A set of 16 scenarios set on geomorphic boards