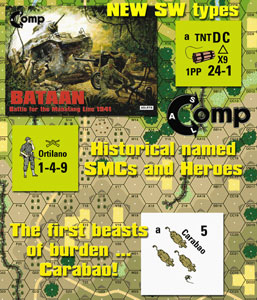 MABATANG, PHILIPPINES, 0830 hours, 12 January 1942: The 1st Battalion rode out the initial Japanese offensive facing little action on their front, enabling the unit to provide support for Colonel Fry’s more heavily engaged units. The commander of 1st Platoon, A Company, Second Lieutenant Alexander R. Nininger, led his men through the night, moving from hole to hole, facing nothing more than occasional sniper fire. Nininger, a West Point-trained, 23 year-old, was born to be a warrior and had no intention of letting enemy snipers go unpunished. During the morning of January 12th, Nininger directed his men to fire into the woods’ edge, where he suspected enemy snipers were lurking. He then gathered stragglers from 3rd Battalion, and along with his men headed into the dense vegetation to root out the Japanese. Enemy fire sent Nininger and his men back out of the brush. Undaunted, he ordered his charges to push back, and they attacked again. When the young lieutenant was wounded he continued to encourage his men to move forward, even managing to work his way to the front. The 23 year-old warrior refused evacuation, declined medical help, and went back at it, rallying his soldiers for a third push. This time he personally took the point, throwing hand grenades and killing Japanese soldiers as he inexorably moved ever onward. At about noon on the 12th the valiant lieutenant finally succumbed to his wounds. For his actions 2nd Lieutenant Alexander R. Nininger posthumously received the first Congressional Medal of Honor awarded during World War II. His, he first Medal of Honor awarded during World War 2 was not the first to be won, although Second Lieutenant Alexander R. Nininger was not aware of the distinction nor is it suspected would he have cared.

Welcome to the ON THE ROAD TO BATAAN, a historical VARIANT module that depicts the fierce fighting for the Abucay/Mabatang Line from 11-15 January, 1942. Situated on the on the Bataan Peninsula, this position ran through Mauban on the coast of Manila Bay (east side) to Mabatang on the coast of the South China sea. ON THE ROAD TO BATAAN contains eight scenarios, all playable on the historical map included. You also receive a set of Special Rules and two copies of the new die-cut counter sheet (a total of 269 color die-cut counters) with Philippine Scouts SMC/MMC, new SW, etc.

A set of cenarios set on the Bataan map

A BONUS counter sheet with Carabao, Japanese tanks and more!