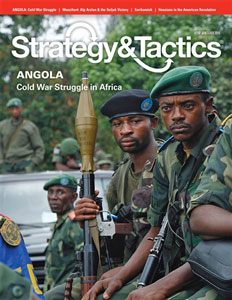 Angola is a simulation of the 1987-88 campaign which was the culmination of the civil war in that country during the height of the Cold War. This campaign saw major offensives by both sides, with considerable intervention by the armed forces of Cuba and South Africa. Among other things, Angola saw some of the biggest armored actions of the Cold War.

The game is operational level. Each player commands the forces of several different factions, each faction representing a major entity in this particular conflict whose goal was to gain control of as much of Angola as possible while inflicting decisive losses on the enemy. Command control is a critical factor, and the game uses a variant of the “Boots” system to model this.

Each game turn represents about one month of operations. The map features all of Angola and the adjoining border regions of Southwest Africa and Zaire. The map scale is approximately 31 miles (50 kilometers) across each hexagon; each brigade or regiment represents from about 1,000 to 3,000 men, depending on the army. A battalion is 300-900 men, whereas a cadre represents small teams of soldiers.