Home > Wargames > Victory Point Games > For the Crown Variant: All the King's Men

For the Crown Variant: All the King's Men 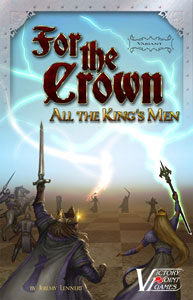 t's spreading. What started as a petty feud has grown to engulf the nation, and even the most stoic spectators are now picking sides. And as the scope of the conflict changes, so must the strategy; each contender must learn to command larger armies and coordinate with new allies. This is truly a time where strong leadership could turn the tide of history...