Darkest Night expansion #3: From the Abyss 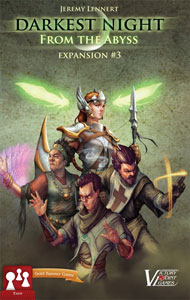 Another homestead overrun; the farmer's face was bleak as he told the tale. The broad strokes of the story were well-familiar, but the details were new: a previously-unseen power in the Necromancer's dark arsenal. It seems his power grows daily.

The hero listened without saying a word, but his eyes blazed with fury. There was no question of our response...

From the Abyss, the third expansion for Darkest Night, provides the Necromancer with an array of sinister new abilities. It also adds the Channeler, Exorcist, Mesmer, and Valkyrie as new playable heroes, along with new Event and Artifact cards. From the Abyss can be combined with either or both of the previous expansions, or used separately.