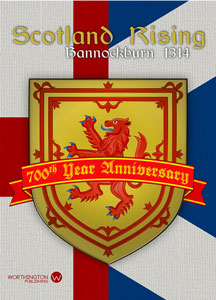 Scotland Rising is to honor the 700th Year Anniversary of the battle of Bannockburn. This is the a PT-90 game, our line of wargames that can be played in 90 minutes. Scotland Rising is a sharp fight that highlights the tactics of medieval battles on crowded battlefield. Knights are powerful and hard to bring down. Pikemen are best in massed formation. Archers have ranged fire but must be protected. Ax men are vicious in a close fight. Robert the Bruce and King Edward II lead their armies. Victory is old fashion medieval style, inflict damage on your opponent and relieve the castle siege.

On June 24, 1314 the decisive battle of the first War of Scottish Independence was fought. The Scot army under Robert the Bruce defeated the invading English army under Edward II. Outnumbered, but well led and fighting for their liberty, the Scots charged the English knights and archers driving them from the field. Can you as Robert the Bruce, drive your country’s enemy from the field, securing independence for your homeland? Or, as Edward II, will you attack and defeat the formidable Scot schiltrons, securing Scot allegiance to your crown? Now, 700 years later the decisions are yours and today is the day where you make history…

Dice and a Rule Book 2 Players