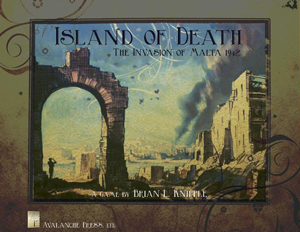 Sitting astride the sea lanes from Italy to North Africa, the island of Malta hobbled Axis attempts to supply their forces in Libya and Egypt. Frustrated Axis planners hatched a series of operations designed to capture the fortress, known as Operation Herclues to the Germans and Operation C.3 to the Italians. Several times the assault seemed imminent, but at each juncture the Axis held back from rolling the dice. Now we let you see what might have happened.

The game includes two scenarios, plus variants covering various Axis and Allied plans to defend and attack the island. The game system is one of our more involved yet thanks to the island’s small size takes only a few hours to play.

Game pieces represent companies and battalions. Units are rated for morale, attack, defense and movement. Superior morale will assist a unit in several game functions but particularly in combat. Tank units are rated for armor quality; anti-tank units have a similar rating used to fight tanks. There are very few tanks on Malta, where infantry will determine the outcome.

Artillery is the most powerful weapon on the battlefield. Artillery units may support an attack or a defense. And artillery must be supplied; running out of artillery ammunition is a very bad thing, and both players must choose where to use their shells. Each game “day” is divided into three daylight and one night turns.

The map is divided into hexagons (“hexes”) and shows the entire island at a scale of 1 kilometer per hex.

The British defense is built around the division-sized Malta garrison of nine regular British battalions, plus four more of the King’s Own Maltese Regiment. They are backed by plentiful artillery and anti-aircraft units. In the first wave, the Axis has a German parachute brigade and a brigade-sized Italian parachute division, plus a small Italian air-landing division. There are also commando units from the Italian Navy and the Italian Air Force. The second wave has two Italian infantry divisions. Italian warships, and German and Italian aircraft, provide support for the attack.