Home > Wargames > Moments in History > Drive to the Baltic 2014 Edition

Drive to the Baltic 2014 Edition 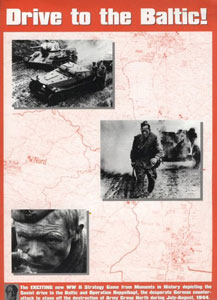 By July 1944, the initiative on the Eastern Front was firmly in the hands of the Soviets. At the northern sector of the front the Red Army had managed to separate Army Group Center from North, trapping the latter. Heeresgruppe Nord faced annihilation.

Welcome to DRIVE TO THE BALTIC!, the Soviet drive to annihilate Armee Gruppe Nord and the German counter-attack known as Operation Doppelkopf.

Drive to the Baltic! is an operational level simulation of the Soviet campaign to cut off German Heeresgruppe Nord from Heeresgruppe Mitte and the subsequent German counterattack, code named Operation Doppelkopf, to reopen a corridor to the beleaguered army group which took place in July and August 1944. The game is intended for two players, one taking each side, but is very well suited for solitaire play.

Drive to the Baltic has been unpated with a 2014 edition—errata input into the rules and a new counter sheet that follows the look of Götterdammerung. Same colorful map. Color play aid.