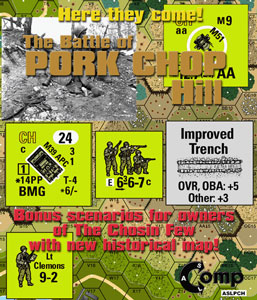 IRON TRIANGLE’ OUTPOST PORK CHOP HILL, 1025 Hours, 6 July 1953: At 1025 hours on the night of July 6th a massive artillery and mortar barrage preceded an onslaught by 700 soldiers from the CCF 200th Regiment, 67th Division. The sounds from the crashing shells concealed the oncoming Chinese, until they burst forward in what was described as “a moving carpet of yelling, howling men--whistles and bugles blowing, their officers screaming like women driving their men uphill.” In a bunker CP just beneath the crest of the hill Corporal Dale W. Cain heard his radio come alive with reports of “enemy in large numbers”. Company A reported hand-to-hand fighting in the trenches. The battle was fought in a driving monsoon rain, making evacuation of the wounded difficult, as well as re-supply. As the battle swayed back and forth, the Chinese made repeated pushes to take the hill while both sides unleased a storm of artillery fire upon the struggling soldiers. During the course of two days, parts of four companies defended Pork Chop. At dawn on July 8th, the rain ended for a time and the initial defenders withdrawn. A fresh unit, 2nd Battalion of the 17th, counter-attacked and re-took the hill, then settled in to prepare a defensive perimeter for the coming night.

We suspect the majority of you out there have witnessed the movie "Pork Chop Hill" more than once, with its stirring performance by Gregory Peck. If you are like us, you've seen it over and over again. It's just that good. Our feelings about this film are on par with those we reserve for YOU, our customers, the historical wargamer with the imagination and daring to break out of the rusty cage, genre-wise, that someone once told you was the only place you could maneuver your cardboard warriors.

Pork Chop Hill has been upgraded with two sheets of BONUS color die-cut counters, the map has been doubled in size to a full-size mapsheet, and you receive two additional bonus scenarios. Ownership of CHOSIN FEW is required to use this product.

> 2 copies of the BONUS counter sheet