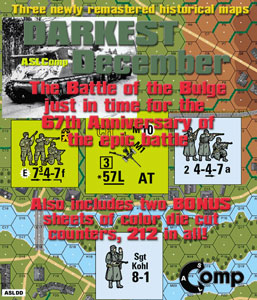 HOTTON, BELGIUM, 21 December 1944: After revealing itself prematurely, the spearhead group of the 116th Panzer Division remained quiet for about ninety minutes. During that time, the Americans had time to improvise a defense. A roadblock was established in the Rue Haute using Bailey bridge components. Command was assumed by Major Fickessen of the 23rd Engineer Battalion. Fickessen organized 200 men from various staff, messengers, engineers, as well as supply and rear echelon troops. At 0900 hours a group of four Panthers slowly moved from the heights toward the east of town, probing for a way to the bridge. They first tried the Rue Haute, spotted the roadblock, and clanked off to some nearby gardens. One Panther continued on alone and returned to the Rue Haute a little farther up the road. There, the massive Panzer faced off against a diminutive Stuart, which was quickly destroyed. The Panther then engaged a Sherman, brewing it on the second shot. The German crew then backed away after seeing some anti-tank mines sitting on top of the ground. The retreating Panzer was struck on its side by shots from an AT-gun and some bazookas near the south bank of the Ourthe. The crew quickly bailed out, leaving the German platoon leader, Oberleutnant Köhn, pressing forward. He entered the Rue des Ecoles near a second building without being engaged, but then reversed back the way he came, fearful of unseen enemy. Back among the gardens, Köhn halted his tank and was attacked by a Bazooka team. The Panzer leader rotated his turret to face the threat but unbeknownst to him, a lone Sherman from the 7th US Armored Division had been found in the repair shops at Marche and requisitioned to bolster the south bank defense. Sited near the bridge, at the corner of Rue Parfonry, it was offered a rear shot and with two rounds from its 76mm gun, the Panther was brewed. The other two tanks pulled back after half-hearted attempts to reach the Rue des Ecoles near the railway line. As a side note, the south bank defenders also engaged a lone German 75mm gun-armed half-track, spotted near the Ti-Château’s heights, and destroyed it with fire from their 40mm Bofors anti-aircraft gun.

Moving images of the Battle of the Bulge often include German soldiers in their long greatcoat scuttling across the fields from their dark forest lairs, the men of the Volksgrenadier divisions. Now YOU can push cardboard around while you play out the epic stand at Hotton on three fully remastered maps from Devils In the Woods/Sudden Full Contact in one updated edition that includes bonus counters and a total of 20 scenarios in all. All of the scenarios are laid out in the new format and owners of our recent Nordic Twilight/BDF II releases should have all the combat counters needed to play without needing to dig into their standard-issue collection when combined with the new counters provided with ASLComp DARKEST DECEMBER.

> A set of 20 scenarios set on the historical maps