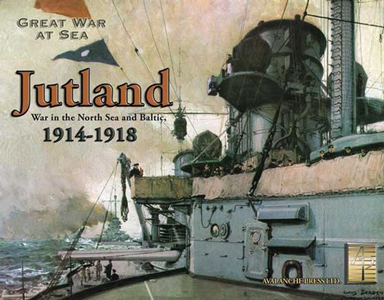 History’s best-known naval battle was just one part of the ongoing four-year struggle to control the seas around Germany’s coasts. If the German High Seas Fleet could catch and destroy a portion of the much larger British Grand Fleet, the blockade suffocating Imperial Germany might finally be broken.

Great War at Sea: Jutland is an extensively updated version of the earlier GWAS Vol. II: The North and Baltic Seas published in 1998. It covers not only the signature battle, but also the many other sorties of the High Seas Fleet like the Scarborough, Lowestoft and Gorleston Raids, the Battle of Dogger Bank and Helgoland Bight.

Like all games in the Great War at Sea series, this one is packed with scenarios. Along with the operations in the North Sea, the game also includes the bitterly-fought naval war in the Baltic Sea. Here the roles are reversed, with the smaller Imperial Russian Navy aggressively seeking an advantage against the larger German forces. The Russian cruiser raids are all covered, as well as the climactic Battle of Moon Sound.

The scenario book includes not only more than 40 scenarios, it’s packed with the background information about the ships, the men and the battles.

The map covers the North and Baltic Seas, as well as the waters around the British Isles; it’s a bit larger than the map in the previous edition. The smaller navies of the region are all represented as well: Sweden, Norway, Denmark, the Netherlands.

But it’s the major powers that get most of the ships. The Royal Navy is huge, with ships ranging from ancient paddle-driven minesweepers to modern battle cruisers like Repulse and Renown. Famous ships like the battleships Dreadnought and Iron Duke, the inaptly-named battle cruiser Invincible, and early aircraft carriers like Engadine and Argus are all here.

The German High Seas Fleet has all the ships that challenged England, from the tiny coast defense ship Siegfried up to the huge battleships Sachsen and Württemburg. The Germans have zeppelins and submarines to help redress the balance somewhat, but it will take skilled play to overcome Britain’s sea dogs.

Russia has modern dreadnoughts, but will depend on her armored cruisers and a squadron of older battleships for most missions.

As with other games in the series, the tactical map is a generic blue field of hexagons, used to resolve surface combat. There, ships maneuver and fight using their gunnery and torpedo factors. Each player rolls a number of dice according to the ship’s capabilities, hitting on a result of 6. Gunnery and torpedo damage tables give the results: ships can suffer damage to engines, hull or armament.